MTV Movie Blog said:
“Judge Dredd” is once again headed for the big screen, giving one of the most popular British exports to the world of comic book characters a second try at live-action movie success. News of a new “Judge Dredd” film being green-lit was announced this weekend on the message boards for 2000 AD, the British science-fiction anthology series that has been the character’s home since 1977.

“We can’t give away too many details at this point, but we’re looking forward to working with DNA Films to bring Judge Dredd back to the big screen,” wrote Rebellion/2000 AD CEO and Creative Director Jason Kingsley.

DNA Films (”28 Weeks Later” and “Sunshine”) is expected to kick off production of the new “Judge Dredd” in 2009. The character previously appeared in theaters in a 1995 film starring Sylvester Stallone that was ripped apart by comics fan and non-fan audiences on both sides of the pond.
Click to expand...

Well, it can't be any worse the Sylvester Stallone version!

Remake or reboot? Or (shudder) sequel? That will be the question facing cinema audiences confronted by a new, big screen Judge Dredd movie in 2010 . . .

Most people (particularly in the States) will probably know Judge Dredd from the 1995 movie directed by Danny Cannon, and starring Sylvester Stallone, Diane Lane, Rob Schneider, Armand Assante and Max von Sydow. The character however has its roots in the weekly British comic book 2000 AD, where he appeared as long ago as 1977!

Basically a one-joke character when one thinks about it, Judge Dredd is a single-minded lawman of a distant future in which black-clad, fascist-like police officers preside over an overpopulated Mega-City One encompassing the U.S.’s entire East Coast. These so-called “judges” act as on-the-spot judge, jury and sometimes even executioner. “Twenty years, punk!” is probably the line of dialogue most often spouted in your average Judge Dredd comic as Dredd immediately sentences criminals he has just apprehended! “The justice system works swiftly in the future now that they've abolished all lawyers,” as Doc tells Marty in Back to the Future Part II. Indeed.

Power may corrupt, and absolute power may corrupt absolutely, but in the comics Judge Dredd is basically Dirty Harry on Overdrive, an incorruptible lawman obsessed with The Law and Justice. The official plot synopsis of the 1995 movie swallows the official line too: “In the Third Millennium a powerful and efficient hybrid of the police and judicial system has given birth to group of new guardians of the law with the power to dispense instant justice and punishment. These judges are law enforcer, jury and executioner. One of these judges, Judge Joseph Dredd is a living legend - six feet of armored justice with no outside interests besides his devotion to enforcing the law.”

Why anyone would however want to make a sequel or (bull**** Hollywood jargon coming up) “re-imagining” of Judge Dredd is a bit of a mystery. The original film disappointed at the box office and made a mere $113 million world-wide. Audiences who didn’t know the character beforehand were baffled. “Considering that the movie was adapted from comic books, the least we should expect is a juicy battle between good and evil,” Anthony Lane wrote in The New Yorker, “but the conflict is, in fact, a matter of fine distinctions between shades of Fascism.”

He added: “Whenever you sit back and try to enjoy the pop wizardry of the special effects, you catch sight of Dredd's epaulettes and think of Mussolini.”

Fans of the comics nitpicked it to death; complaining about how the movie departed from the comics: how Dredd never removes his helmet in the comics and how sexual relationships between judges (or anyone else for that matter) are verboten too in the comics. (No wonder they are so violent!)

Even the movie’s star thought the movie sucked. As Sylvester Stallone admitted thirteen years later in an interview with Uncut magazine:


Sylvester Stallone said:
I loved that property when I read it, because it took a genre that I love, what you could term the 'action morality film' and made it a bit more sophisticated. It had political overtones. It showed how if we don't curb the way we run our judicial system, the police may end up running our lives. It dealt with archaic governments; it dealt with cloning and all kinds of things that could happen in the future. … But I … look back on Judge Dredd as a real missed opportunity. … For me it is more about wasting such great potential there was in that idea; just think of all the opportunities there were to do interesting stuff with the Cursed Earth scenes. It didn't live up to what it could have been.
Click to expand...

So why bother remaking a movie that did poorly at the box office, and which even its star didn’t like?

The new movie will be produced by 2000 AD, Rebellion, and DNA Films, the production company behind Sunshine and 28 Days Later. “We can't give away too many details at this point, but we’re looking forward to working with DNA Films to bring Judge Dredd back to the big screen,” Jason Kingsley, CEO and Creative Director for 2000 AD told the press.

The involvement of 2000 AD can only mean one thing: that the publishers weren’t happy with the Stallone film and believe that the property has more potential. (The same reason why Marvel basically went for another Hulk movie last year.) But does it? Sure, any new movie version will probably be way better than the 1995 original as long as Stallone and Rob Schneider (in annoying sidekick comedy relief mode) stay far, far away from the project. Judging from the recent Rambo movie Stallone doesn’t believe he is too old at 62 to be a kick-*** action hero, but we’ve got some news for him!

So think “reboot” instead of “sequel” here, which is a good thing. But the problem is that any new movie version will struggle with the same issues that the 1995 version did. What works on the comics page doesn’t always work on the big screen. How does one make audiences care about an inherently unlikable one-dimensional character who never even removes his helmet (no, never!) throughout an entire movie? Can you imagine a Batman movie without the Caped Crusader slipping into his Bruce Wayne persona at least once? Audiences need an, er, human face to relate to. Remember how dumb all those scenes with the talking masks (of Spider-man and Green Goblin) looked in the first Spider-man movie? Now imagine an entire movie like that . . .

Also, when one thinks about it, the perfect Judge Dredd movie has already been made: the 1987 Robocop . . .

However, if Hollywood is intent on giving Judge Dredd another shot, then we’d suggest the following: travel 20 years back in time, hire Paul Verhoeven and let him make the movie with Arnold Schwarzenegger as Dredd. It’d be ultra-violent and darkly humorous, and fans will never have to cope with that whole Sylvester Stallone as “six feet of armored justice” nonsense

If you can’t manage the time travel thing, acquire the rights to Matt Wagner’s Judge Dredd story, America. First published in 1990, America takes the whole “future run by fascists on silly-looking motorbikes” thing quite seriously. It is a heartfelt and elegiac story that shows the flip side of the coin. In most Dredd comics the judges are the heroes, but America is an earnest examination of what it would be like to actually live in such a future society as an ordinary citizen.

Told in flashbacks, the story is about two childhood friends, America Jara and Bennett Beeny (who secretly has a crush on her). Beeny grows up to become a famous singer and comedian. America however becomes more and more disillusioned with the fascist police state run by the judges. She becomes a pro-democracy activist and later a terrorist. 2000 AD editor David Bishop has it right when he describes Wagner’s tale as “the best Judge Dredd story ever written.” Sure, it shifts the focus away from Dredd (who is a flawed background villain at best in the story), but it is a deeply-felt emotional love story of betrayal and idealism. Get Ridley Scott to direct it in his signature visual style and you will have the big screen equivalent of the new Battlestar Galactica: a dark, foreboding tale that will appeal to non-genre-fans too! We won’t pay good money to see anything less ourselves! Unless you manage that time travel stunt of course, in which case we’ll pick up the DVD later this afternoon . . .

(The film is most likely to begin production in 2009.)

Staff member
A sneak-peak for the new Judge Dredd movie has been released. With a working title of just Dredd the new movie aims to be a reboot of the franchise. Or, in other words... just forget all about the Stallone version.

Dredd takes place on a fictional Earth created as a result of the Atomic Wars. Survivors of this period are living in Mega-Cities, which protects its citizens from the Cursed Earth, a radioactive desert environment populated by mutants.

The main story takes place in Mega-City One, where the police who are now called judges have the power to use police brutality to some extent to fight extreme murders.

One man, Judge Dredd (Karl Urban), a senior law enforcement officer, teams up with a cadet called Judge Anderson (Olivia Thirlby) to track down a terrorist organization lead by Ma-Ma (Lena Headey), who is responsible for selling a reality-altering drug called Slo-Mo.
Click to expand...

Kevin said:
A sneak-peak for the new Judge Dredd movie has been released. With a working title of just Dredd the new movie aims to be a reboot of the franchise. Or, in other words... just forget all about the Stallone version.

I'll watch this reboot, but honestly, I enjoyed Stallone's version as well. Say what you will about Stallone, but he knows how to make a great action movie and this one deserves better props than it received.

Staff member
I updated the video clip above in post #5... the sneak peak was taken down.

The Stallone version wasn't a bad movie but was a lot more teen friendly as opposed to the dark feel of the original source material; kind of like how TMNT went from a black & white limited edition print with violence to a pre-teen friendly franchise. Armand Assante did a great role in the first movie as it provided the contrast to Stallone but addition of characters like Rob Schneider was just over the top. Yes, the movie had some dark moment in it but it wasn't a dark movie.

The new Dredd movie on the other hand seems to be sticking closer to the original concept.

Hmm, a new Judge Dredd fim with Sylvester Stallone. I certainly hope it's a good one. I noticed they opted to make this a much grittier film, like the comics, that's got to be a good thing...I hope. 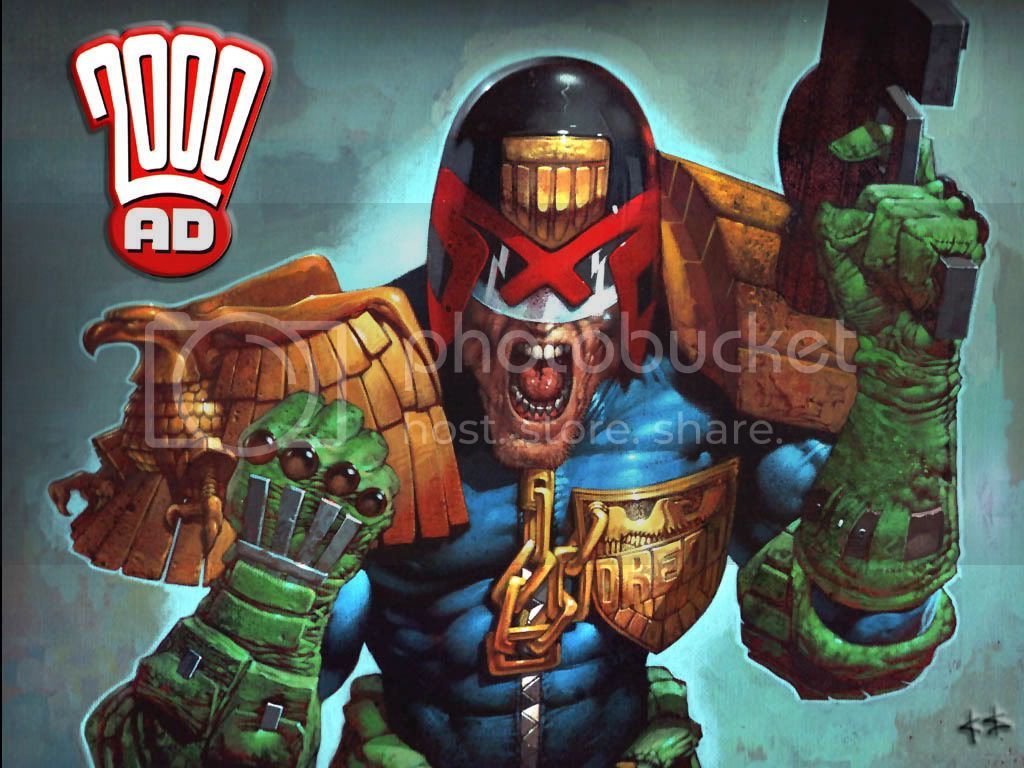