Members can discuss what they are reading or just finished reading here.

Books are the core of our genre, always have been, always will be.

Some people believe scifi is a small genre, not a career that will make you a decent wage over your lifetime and not worth the trouble.

But let's see posters here posting about the books they are reading and see just how many people have read the same book! There's a lot more out there than some people believe!
C

I'm currently reading a book by susan matthews named "Angel of Destruction." It's a pretty good read so far, but I seem to be in the middle of a series. It's something called the "Justice Universe". Any one else familiar with this author? The characters are very well done and nicely fleshed out, and everthing is very believable.

that cover is hilarious! looks 40 years older than when it was actually published. be assured the version i have is much more modern styled 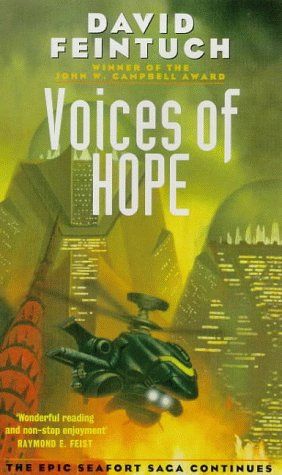 5th in a series of 7 brilliant scifi novels. "Hornblower in Space" is the catch word for these. 18th century british naval tradition (religiously oriented) used to effect to create a rigid system who's rules suck you in from book to book until you can imagine the universe so easily.

(been trying to read a novel a day for therapuetic reasons, at 500 pages approx per book it's being a bit difficult, think i'm into day 7 already. when i finish i will be reading moving right onto Richard Morgans : Takeshi Kovaks series, re-reading the first 2 of 3 that i have already read then finally reading book 3 that i got just recently (even though Fantasticfiction stated a september 2005 release!!!!)
S

I am now reading Arena by Karen Hancock. Only 50 pages in but so far not too bad.
R

I'm reading "A History of the English Language" by Albert C. Baugh and Thomas Cable. David

Right now I am reading The Chronicles of Thomas Covenant the Unbeliever by Stephen R. Donaldson.

I read this series a long time ago, but decided to read it again because he is in the process of writing a third trilogy.
S

well, read Richard Morgans : Takeshi Kovacs series from start to finish after getting the third and last-to-date book in the series.

our books to date and all of them large in page numbers, surprised new writers are getting books like this published in the scifi scene, rather than keeping to the 300 page count for new writers

curiously, in the 3rd book, mentioning the storyline of the 2nd book, the main character throughout is thinking about the storyline in 2nd book, getting grief over other characters about his actions there, yet in the 2nd book he was on the opposite side of the war to the atrocities he is supposed to have committed. very confusing!
T

I am currently reading...

...Resurrection by Paul S. Kemp. This is the 6th book in R.A. Salvatore's Drow Series. He is not a bad writer, but he does take chances. In the first two chapter, Mr. Kemp uses racy language and goes into depth describing a castle made of infused bodies and lost souls--pretty graphic. I will let you know how the book progresses.

difficult to enjoy book seen from an old womans perspective. there are times when you don't feel the need to give information that you assume an intelligent reader would already grasp. but i feel the content of this book is so far off the normal curve of knowledge and understanding for normal readers that more explaining should have been done.

also the ending was very badly done. even dropping back to the style of "wow" and "awe" of the 1950's would have been far better. i'm not wanting to give spoilers, but state that a fair way into her careeer and with a number of series written around the time this single novel was written, i find it hard to decide why this book was published without more editing being planned out by the publishing houses


a writing style seemingly teen friendly, that turns into more adult material. Interesting stories told out by characters in meetings along the stroyline following a single character around the galaxy. from the barmans tale to other oddball characters it's an easy read, almost taking the easy option of a series of short stories interconnected by sections of main original character we see a cheap and easy way to prevent many mistakes that can be made in writing a novel.

almost pulp material, it fills in your time in a reasonable fashion, so i will stay neutral about this one. anybody can read it and the more readers who come into our world and stay here, the better!

it took the least used avenue of star travel and made a character driven book that didn't flow at all for me. wasn't impressed with the totally sedate passages followed by decent action/theological sequences

into Arthur C Clarke and Stephen Baxter's : The Light Of Other Days. i'm not a bigfan of Stephen Baxter and think that maybe Clarkes novels have become too "now", less science fiction and more science fact. this book becomes a bestseller type genre for the masses, less for the hardcore scifi fans.

subject matter of this book is about wormhole technology used for viewing. viewing across the planet instantaneously and into space, then finding out time becomes a factor too. (dinosaurs and religious imagery!) i'm not religious at all anymore having been force fed religion against my wishes growing up. i tend to go for scifi that respects peoples beliefs for background colour and character development but not delving into earth religions as fact.

i read it because it is there! it's in my collection to be read and theres a bit of a drought for scifi books in the charity and secondhand shops in my city (apparently from talking to staff, theres the belief that dealers are coming in and snapping up the books for sale elsewhere at probably 3 times the price they paid! doesn't do the usual buyers much good)

(maybe i ought to start listing every book i read, but theres been way too many recently, i go through upto 5 novels a week sometimes!)
B

I am currently re-reading Terry Brooks Shannara series as I never did read it all at once, so I have just spent my afternoon reading Antrax.

Cecelia Hollands's : Floating Worlds, 1976 reprint, the cover i have is not suitable for this forum!!

In Floating Worlds, Paula is a woman to reckon with on several planets. Lover of the Prima of the Styths and mother of his son, she has tremendous galactic powers, and many mighty foes: rival factions on Styth; the fascist Sunlight League of Mars; the treacherous Committee members; and, most crucially, the mysterious Tanuojin who has healed her with his hands and has read her thoughts. Alone, she accomplishes what no one else could, until final choices, for herself and for mankind, must be made.
Click to expand...


a large and complex storyline, covering numerous locations and characters. Our heroine is maybe too lucky in explosive situations she finds herself in, managing to survive to the end even though she is physically frail against the characters/aliens that surround her.

the author picks a heroine from a future earth that has gone politically Anarchist, then feeds in a genetically modified race from earths past exploration, mining and settling of the solar system that has turned around on it's previous masters, blaming them for everything. our heroine aligns herself with this race, scheming to place the race in power, without any real explanation of why she does it, in the process wrecking her home planet and most of humanity in the solar system.

the use of sex, diplomacy and physical power of the race she has aligned herself with constantly reminded myself of white women i know/knew who have been attracted to the immigrants from jamaica and other african countries. this is not a racist comment, but an acknowledgement of certain women who played and still play a dangerous game, risking their own identity and respect. it's alright for races to mix and marry, have children. there is no problem there. but when a citizen turns her back on her own people and looks to destroy them, ending up with nothing themselves, then you know the actions taken are morally and humanely wrong.

this story is not for kids or even teenagers. the storyline is too adult and explosive. i'm shocked to find a female writer producing a story like this which if anything can only lead to a damaging of womens rights. but since the story was written in the early to mid 1970's i suppose it was a different world then.

if this story hadn't had the interplanetary travel and conflict, the occassional science devices stuck in the story without any indepth look at them, this would be a fantasy book easily. i always see fantasy as putting ourselves in the past, with more aggressive, testosterone laden character interactions. scifi is not the place for this story and i can't recommend this book to anyone.

Ben Bova's : Millenium. second of a trilogy about an independent nation, on the moon.

I used to appreciate Ben Bovas work, which tends to be Earthers reaching out into space, with politics and human emotions easily related to. Unfortunately as i've gotten older i just don't feel the same, his work has cardboard characters who we can't relate to on a human basis normally. They aren't normal people in that they always manage to have abilities, contacts and facilties open to them that we maybe don't like to see. Adversity, defeat and loss are part of life. Thats normal.

a good hard science book. two of the main characters in the book are both female, then one of the main aliens in the book is female also. a pattern interesting in deciding how the writer decides which characters he uses. this is Benfords latest book, i have another : Beond Infinity, a 2004 release, that i am reading now to get some compairosn on his writing and themes.

the author has a doctorate in plasma physics and knows his stuff regarding the hard science side of things. also this first novel i have read is structured well with all the ideas in the book tied in together making a comprehensive storyline.

this book is worth reading, lets see if more of his is also the same.

On book reviewing and films