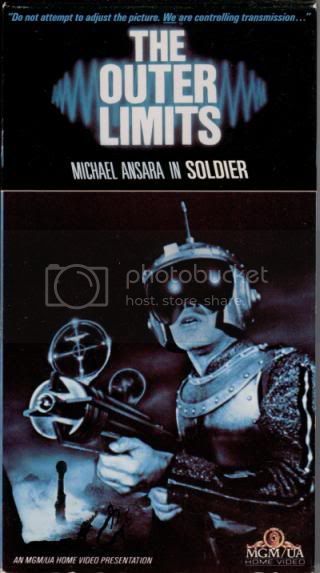 While clearing out some of my old VHS tapes, I ran across my favorite episode from the original Outer Limits TV series: Soldier. I watched this outstanding hour-long show when it was originally broadcast on September 19, 1964. It is unforgettable. Written by Harlan Ellison, the tale begins in the far future when the Earth is a desolate, war-torn planet. A soldier in battle helmet, armed with a distintegrator rifle, pauses for a smoke break. But not for long. His helmet starts issuing audio commands: "Find the Enemy! Attack! Kill!" Not far away is another soldier-of-the-future in similar armor, and in minutes the two adversaries are charging toward each other. But as they collide, two artillery-like energy beams cross at their exact location, throwing both troopers into a time warp that transports them back to 1964. The first soldier reappears in a back alley of some large American metropolitan area, and he soon draws attention from startled passersby. Then the police arrive and start to advance towards him. He raises his blaster rifle and vaporizes their police car with a single shot.

Finally taken prisoner and sequestered in a government holding facility, the rest of the tale shows how the puzzled officials interrogate and, finally, correctly identify just what the dangerous visitor is: the ultimate infantry soldier.

The second soldier remains trapped in the time-warp flux, unable to free himself until much later in the story. But when he does, the mission imperative remains: "Find the Enemy! Attack! Kill!"

Michael Ansara played the role of the first soldier from the future, Quarlo Cobregnny, and was well known to TV audiences in 1964 from the western TV series Broken Arrow, in which he starred as the stoic Apache Indian chief Cochise.


Soldier is filled with wonderful science-fiction details like self-igniting cigarettes, reports that Quarlo's disintegrator rifle continues to function even when parts are removed from it (advanced quantum physics?), and Quarlo attempting to verbally report to a pet cat because felines are used as recon scouts on the battlefields of the future. It is a one of the earliest and finest examples of military science fiction to appear on TV, in glorious black-and-white. 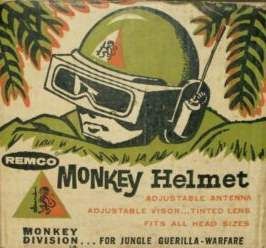 A bit of trivia: Quarlo's battle helmet would reappear 14 years later, worn by Robin Williams in the goofy 1978 TV comedy series Mork & Mindy! Fact is, in 1964 I had a toy helmet similar to Quarlo's: the now-rare Monkey Division visored helmet!

Is that the one where two soldiers, one from each waring world, fight it out like a joust?
Michael is captured by us and disarmed when the other one warps in and he's sort of a dummy and takes his orders from a cat, (who wind up being the superior intelligence/leaders of the future), and ends up victorious?
If I remembered it correctly, an awesome episode !
At least half of the Twilight Zone & Outer Limits episodes affected me for life, and put me on the "road" of Sci-Fi.
Thank You

I'll have to try to keep an eye out for this one as it sounds pretty interesting. Well, except for the part of talking to cats. I must go check the DVD outlets...

Staff member
Turns out that there is a Wikipedia article for this one episode alone...

(Warning: Spoilers given in the article if you have not seen it yet.)

When they are written by such an eminent scifi author, they deserve their own writeups!

DannyMcg. Not only did the plot probably inspired the movie, "Terminator", but Harlan Ellison sued the producers for plagiarism and got an out of court settlement, plus an acknowledgment in the credits.

And yes, being the old fart that I am, I do remember Michael Ansara from the '60's. Not so much from "Broken Arrow". but moreso because he was married to Barbara Eden. ("I Dream of Jeannie") Lucky bastard.

Ansara is also well known as the Klingon commander Kang in Star Trek, the original series........


"The machines rose from the ashes of the nuclear fire. Their war to exterminate mankind had raged for decades, but the final battle would not be waged in the future. It would be fought here, in our present. Tonight....."

good ep
I think he was in Patton
had a memorable role as a Native-American lawyer in a two-part Gunsmoke story. traveling lawyer who defended some Indians no one wanted to deal with.
not my favorite OL ep but good. I think first ep in season 2?