The force is strong with Mickey Mouse.​
​
The Walt Disney Company announced on Tuesday that it is purchasing Lucasfilm in a stock and cash purchase valued at $4.05 billion. The deal includes plans for Star Wars: Episode VII, aiming for release in 2015, with more Star Wars movies planned to “grow the franchise well into the future,” according to the release.​
​
“For the past 35 years, one of my greatest pleasures has been to see Star Wars passed from one generation to the next,” said Star Wars creator and Lucasfilm CEO George Lucas in a statement.​
​
“It’s now time for me to pass Star Wars on to a new generation of filmmakers. I’ve always believed that Star Wars could live beyond me, and I thought it was important to set up the transition during my lifetime.”​
​
Veteran Hollywood producer Kathleen Kennedy, who recently became co-chairman of Lucasfilm, will become the studio’s president, reporting to Disney chairman Alan Horn. She will executive produce the future Star Wars films, with Lucas serving as a creative consultant.​

As for the new Star Wars installment, the companies only would say that Lucasfilm’s Kathleen Kennedy would be executive producer on Episode 7 and any more Star Wars movies, and Lucas would serve as creative consultant. There was no indication about where the story would pick up, though technically in the franchise’s chronology it would follow Star Wars: Episode 6 — Return Of The Jedi, the third film in the initial trilogy that came out in 1983.​
​
UPDATE 2:

Staff member
I guess Lucas gets two things with this move, the franchise will indeed live on well past him now that it will be part of the Disney machine and by putting it under the Disney umbrella the Star Wars franchise moves closer than ever to being something just for kids that he has talked about before.

I see somewhere else he's listed as "consultant" in the future. Maybe that part of the contract will cause people to go, "Great! .......oh, no...."

More information is slowly coming out. Movies 7, 8, & 9 are definitely planned based on Lucas's notes and he will be acting as a "consultant" on at least movie 7. The much talked about live action series might also finally see the light of day. After movie 9 Disney is planning on a new Star Wars movie every 2-3 years. Source material for the new works may also be some of the books, comics, & games that have been released and are considered canon, that way they can have movies/shows that are hundreds of years apart from each other similar Star Trek TOS versus TNG.

I'm not sure this is good news. Sometimes it's better to say that was brilliant while it lasted but nothing goes on for ever. On the other hand, James Bond is still going...

Ratrunner said:
I'm not sure this is good news. Sometimes it's better to say that was brilliant while it lasted but nothing goes on for ever. On the other hand, James Bond is still going...
Click to expand...

I'm trying to get a feel of both sides of the argument (it is good for SW versus it is bad for SW)... what kind of negatives do you see coming out the deal?
R

Kevin said:
I'm trying to get a feel of both sides of the argument (it is good for SW versus it is bad for SW)... what kind of negatives do you see coming out the deal?
Click to expand...

Disney is Disney. I think the whole corporate control that they'll put in place will stifle the innovation that made Star Wars great in the first place. It sounds like they want a never ending franchise too with films every 2-3 years. The end product is always going to be affected when there are deadlines to be met like that.

Thoughts? Will we be seeing a very bright & shiny Star Wars VII with lots of lens flare?

Thoughts? Will we be seeing a very bright & shiny Star Wars VII with lots of lens flare?
Click to expand...

UPDATE: Various news sites are now reporting it as "confirmed" that Abrams will be directing Star Wars VII. Ben Affleck was also on the short list as director . 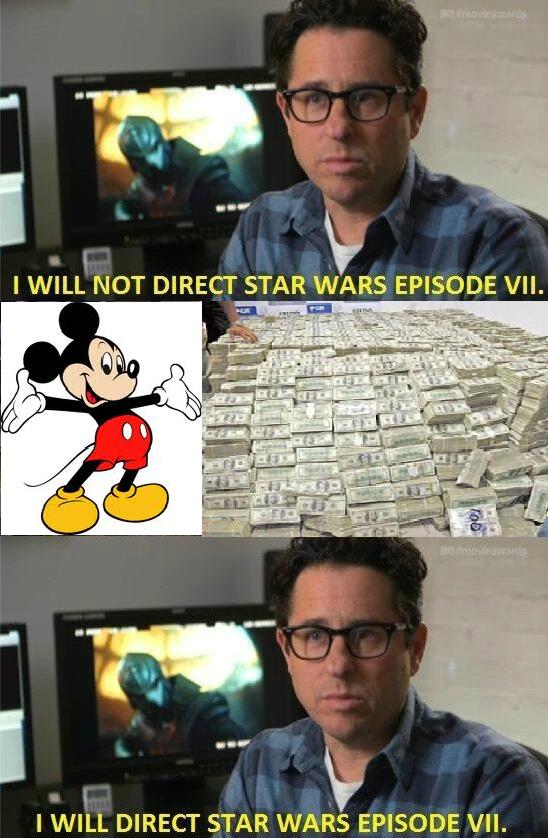 I'm actually cautiously optimistic about the new star wars movies. There's no doubt in my mind I'll go see them. Even after the 2nd prequel I still went and saw episode 3.

I do think that they need to do more than just continue the series though. Branch out. Some of the best Star wars related stuff I've experienced has been the Knights of the old Republic games. (Haven't played the online one.)

I don't think we need to continue the story of Luke, Hand and Leia. But a story could certainly be told about the rise of the Jedi again.

It is Disney man - ******ed, childish movies. I don't believe they are capable of creating another SW masterpiece.

Kaiser Soze said:
... childish movies. I don't believe they are capable of creating another SW masterpiece.
Click to expand...

It'll be interesting to see if under Disney they go back to the feel of the original trilogy or continue with Lucas's "Star Wars is a kids movie" mantra that he has insisted upon with the new prequel trilogy. By the 3rd movie, Revenge of the Sith, it seems that fans were being listened to by having the movie take a darker turn then the first two prequels.

I think, well, okay, *hope*, that Disney realizes that if they take the Star Wars franchise into the typical Disney-esque style of pre-teen friendliness that they'd be killing off most of the existing fan base.

Kevin said:
I think, well, okay, *hope*, that Disney realizes that if they take the Star Wars franchise into the typical Disney-esque style of pre-teen friendliness that they'd be killing off most of the existing fan base.
Click to expand...

I don't believe Disney is capable of making something other than Disney-esque, polished stuff.

For me, just the lack of George Lucas' input will be a huge step.

Also, be aware, that a great many people are watching the original trilogy from before the age of 10. They're not exactly adult movies. And with Abrams directing, they could manage to tap into the complaint that has dogged the new Star Trek movies, that being "They're too much like Star Wars."

Finally, I actually like a whole lot of Disney movies, so them taking over the franchise while Baffling to me, doesn't fill me with dread.

Still George Lucas going to act like adviser in SW VII, so there is still a chance, that movie won't be so 'bad'.
Anyway, Im mostly sure, that Im going in cinema to see it, just because it's Star Wars.

Not entirely made by Lucas = not a SW movie to me. I wish it is good, but it won't be, imo.

Sci-Fi Has a name been given to the Disney Star Wars trilogy & movies?

Little Girl Choose the Dark Side at Disney (Star Wars)