An interesting article on the BBC newsite including short interview quotes from the guys behind the Asylum film company appeared today: 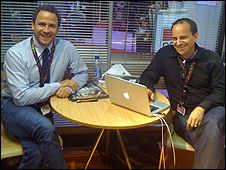 The two met as kids and got into home movie making and have taken it to a fully fledged business that is a viable career for them, even with all the cease and desist letters they receive and arguing over artwork, logos and fonts!

Interesting to note how they feel their fans saw their own versions of War of the Worlds and Sherlock Holmes as better than the big budget versions. Even if, "ours has dinosaurs and dragons and robots in it." 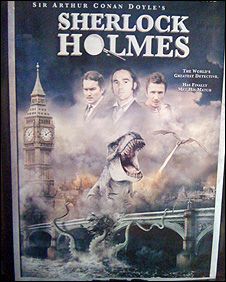 They say they are making a living and will never give it up, even if they receive offers from the big firms to go work for them.

Staff member
Wait, these are the guys who unleashed "Transmorphers" on the world? OOOohhh, they should be ashamed of themselves....

I've seen a few films by Asylum simply out of curiosity. I can't imagine how they can make money, who would seriously buy their films, I can't see the cinemas or the television networks buying any. Possibly private buyers would buy their DVD but even so, who?

They are straight to DVD specialists, so cinema releases aren't in their budget, and I'm not sure if TV networks have ever picked up anything of theirs?. War of the Worlds wasn't that bad actually. Three versions came out at the same time. The Tom Cruise blockbuster, a Thomas C Howell one and a period drama (set as the book!)

I am interested in tracking down the Sherlock Holmes one though It interests me much like the Jane Austen rewrite of Pride and Prejudice with Zombies does.

Staff member
Plus, in their defense, they did bring the world Mega Shark vs Giant Octopus!

Some sort of 'tie in' with Prince of Persia that got me scratching my head, utterly. I honestly could not figure out the storyline properly. The camerawork shifted between locations and confused me. The SFX was truly appalling. Some of the film cutting was abysmal (I mean, who cuts an explosion scene before it is over? Unless the rest of the shot was ruined somehow by an actors hand/head/foot getting in the way..............)

Patrick Muldoon, how far you have fallen!!!!!