Think of each moment as a 3d dot. A sphere if you will.
The sphere is intersected by lines thru its center.
Sorta like a spiked ball but with many spikes all around it.

As we traverse thru time we establish a path of moments like a line thru the jar of BBs. It zigs and zags, loops and twirls as it progresses.

If we zoom out and look at the bigger picture we see that the jar is not really a jar but a single spike of a much larger dot. All emanating from the single moment of our conception.

We are traveling within a single spike with limited possible outcomes. As we age, our spike path reduces in the number of paths for each moment until there is only one more moment left, like the point of a needle.
On that last moment, there are no more paths to more moments and we die.

Destiny can be thought of as the spike path within the larger spike path which is separate from all others. Like a diminishing fractal. We can't jump to a new spike because we have left its connections in the past. We are limited to only the paths that emanate from our current moment.

Since time always moves in one direction, we can never backtrack and take a different path spike to a new destination. Our destiny lies within the path we have access to.

Fate is the very last moment where no further spikes occur. The last dot on that line.
We don't know which spike will lead us down which path but all paths lead to a final moment.

Here is a limited graphic that show how it may look from a distant perspective. Imagine a single line from the center to the edge as the path of actual moments and the rest of the image represents all the possible moment. Each line is really a path of spiked dots strung together by destiny but viewed from a distance they appear as a line. Zoom in on any spot on any line and you would see a similar image, like a fractal. 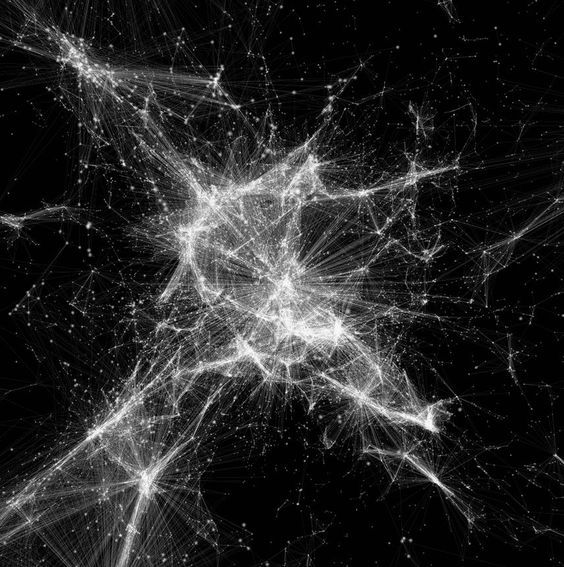 This image is significant because it is a real image taken from The Cosmic Web.
The Network Behind the Cosmic Web
QUOTE:
The concept of the cosmic web—viewing the universe as a set of discrete galaxies held together by gravity—is deeply ingrained in cosmology. Yet, little is known about architecture of this network or its characteristics. Our research used data from 24,000 galaxies to construct multiple models of the cosmic web, offering complex blueprints for how galaxies fit together. These three interactive visualizations help us imagine the cosmic web, show us differences between the models, and give us insight into the fundamental structure of the universe.

The reason it is significant to destiny is because we are part of the Universe and the Universe is fractal. It shows the basic foundation of chaos and predicts destiny. It all fits together as the natural way of existence.

Don't forget the tholian webs too.

I'm sorry...I don't see the correlation?
The Tholian Web and the Q construct were impediments to physical movement.
They did not represent a path thru time based on momentary decisive outcomes.
They represented containment of an object.
A blockage in destiny merely changes the path but it does not stop it.
That is because there are multiple paths at every moment, each one to a different outcome.
Some paths are taken by decision, some by instinct and some at random.
It would be like being restricted by a Tholian Web but having 50,000 other avenues of escape.

Your illustration reminded me of a Tholian web. If the universe was created by a "big bang", what created the big bang? Cant get something from nothing. You probably figured out by now I gots religion, but its all gravy, I keeps to myself. I try not to over think some things because it may grant me a heart attack. That's why I dig sci-fi, its layed back. Btw, I just ordered the funny 80's movie Terrorvision, its funny and its Italian like half of me.

sci-fi-dude said:
If the universe was created by a "big bang", what created the big bang?
Click to expand...

Yeah, this topic is about destiny but I have written my ideas on the Big Bang and creation, also God, energy, aliens and gravity. I even have a post or two on the eventual end of the Universe.