Defiance is an epic fantasy drama combining the scope of a sci-fi blockbuster with the intimacy of a small-town drama. Set in the near future, the series introduces an exotically transformed planet Earth, permanently altered following the sudden – and tumultuous – arrival of seven unique alien races. In this unknown and unpredictable landscape, the newly formed civilization of humans and aliens must learn to co-exist peacefully in a town called Defiance.

In an unprecedented approach to storytelling, marking the first-ever convergence of television and online gaming, the narrative premise of the serieswill also be depicted in a brand new open-world game, Defiance, developed in parallel by Trion Worlds. Viewers of the series will follow the action of the immersive character drama set in the boom-town of Defiance in St. Louis, Minnesota, and gamers will adventure in the new frontier of the San Francisco Bay area.

Whilst the series and the game feature an interconnected world and there are shared points of reference, they are powerful and complete stand-alone narratives and do not need to be experienced concurrently.
Click to expand...

It will be interesting to see if they can truly bridge the media gap between TV and gaming. There have been prior attempts at multi-media projects but with the backing of SyFy this one might actually succeed.

I'm just hoping that SyFy actually stands behind it for the long to run to see if the fans start to embrace instead of what they usually do of killing a project as soon as it starts to look like it isn't getting monster ratings.

Here are the trailers for the TV series and the game co-op play...

EDIT: Updated the 1st trailer to the official SyFy trailer.

Pre-orders for the game have started.

Wow. First episode is epic fun. This is quality stuff. SF-ly speaking it's a bit of fluff ... but in a good way.

Mirelly said:
Wow. First episode is epic fun. This is quality stuff. SF-ly speaking it's a bit of fluff ... but in a good way.
Click to expand...

Oooooh, I still have it on the DVR, will likely watch it tomorrow. Based on some of your other posts I'm a bit surprised to see you give it a positive reaction.

I was surprised too. It's why I posted. I was quite blown away. There's plenty of unexplained elements which can be revealed as the series develops but, unlike with similar franchises, I got no hint that the mystery bits are there to give the producers the opportunity to play the deux ex machina card.

But mostly it was just epic fun like Star Trek used to be ... only with epic CGI to make your eyes goggle.

I had a chance to catch the premiere tonight and it is actually pretty good. I would qualify that with "pretty good as an action series" but still good.

The premiere packed in enough action & information that it doesn't feel like two hours (OK, I fast-forwarded through the commercials on the DVR but you get the idea) while watching it. A story line point dealt specifically with terraforming which is actually something I was wondering watching the trailers because the terrain of Earth has been radically altered. It still doesn't explain how buildings & the St. Louis arch survived but kudos to the writers for dealing with it at least.

As purely as a 'popcorn' TV show, it worked.

For those who have watched it... did anybody else get a Eureka feeling from it? I mean, come on, take a pitch of "A lawman travelling with his daughter comes across a town that has dark secrets filled with range of characters and he becomes their protector after realizing that he may have found a home & love!" and it'd be hard not too.

Kevin said:
I It still doesn't explain how buildings & the St. Louis arch survived but kudos to the writers for dealing with it at least.
Click to expand...


Heh heh, I thought the same thing ... but was more worried about that arch was still standing with a giant bite of arc at what looks like the most stressed part of the structure.

Mirelly said:
Heh heh, I thought the same thing ... but was more worried about that arch was still standing with a giant bite of arc at what looks like the most stressed part of the structure.
Click to expand...

I noticed that also but I don't think we were the only ones -- damage is different between the commercials versus what was shown in the first episode!

In the commercial the arch looks like a huge chunk is missing out of the side near the top but in the first episode that aired only the some of the outer panels were missing.

The commercial is on the left, the episode is on the right. 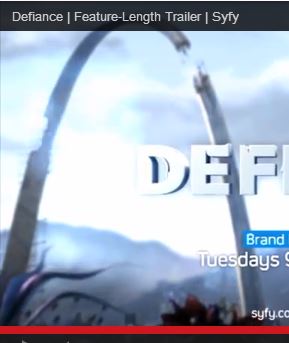 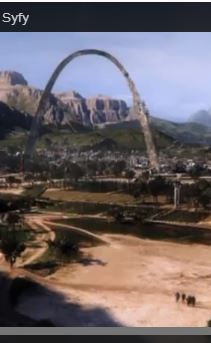 The second episode aired at the beginning of the week and I had a chance to watch it last night. The pace of the action is about the same as the first episode and some story arc developments are starting to fall into place. The pace is actually fast enough to make me wonder if SyFy originally planned this as a limited mini-series.

Earlier I mentioned that the first episode made me think of Eureka in the basic premise of the lawman father & rebellious daughter accidentally finding a place to call home. The second episode kept me thinking of another show again, this time, Futurama, thanks to "Old" St. Louis being underground with Defiance on top of it. I was snarkily thinking "What next, mutants?" but then I saw the preview for next weeks episode.

My one real complaint is that the ending of the second episode is a tad predictable. So, as you're watching it... yes, what you think is going to happen to 'that guy' will happen. By now we have all read enough books & seen enough movies/TV to spot a scene that is nothing more than a setup for a predictable conclusion and the writers fell into that trap.

... and, speaking of the 2nd episode, if there was ever a bet placed that I would hear a Nirvana song in a sci-fi TV show I would have lost!

Its a great series I hope they do another season! I hate it when a good show gets cancelled...

I've been getting the DS9 overblown character feeling with the show. Perhaps because of the 'soap' type feeling that turned me off Arrow. There's many different elements in this show which seem to be from other shows and computer games though which has kept interest till now. Some surprising acting from the black policeman though.

Tim said:
... Perhaps because of the 'soap' type feeling that turned me off Arrow. ...
Click to expand...

Three episodes in and I am already tired of the cliched Romeo & Juliet sub-plot. The writers are spending way too much time with something that viewers have seen many times before in many different alterations. Perhaps they are wasting time with it as part of trying to attract a younger audience from the connected Defiance game?

That aside I like that they are keeping the series at a relatively fast past, much faster than the first season of, by contrast, Revolution. As Tim said, there are elements that we've seen before. Besides Romeo & Juliet, we have also have the 'mystical alien' introduced now and the thing with the bug pheromones, all of which we've seen many times before. They combined it all with a good pace but they need to get away from the cliches and get a solid story line going that makes Defiance unique from what we've seen before.

The previews of the 4th episode looks like they'll circle back around again to the larger story arc with the mysterious device found in the caves by the son of the mine owner.

And, if anybody was wondering, the song used at the end of the show is a cover of Ooh Child by The Five Stairsteps, a soul song that goes back to 1970. Thinking out loud, I guess the new politically correct term would be to call it a "R&B" song instead of a soul song. You can check out the video here.

If you didn't already know this guy and his theory on storylines and characters, it's time to spend some time reading it now: http://en.wikipedia.org/wiki/Vladimir_Propp

Read it now? Now imagine scriptwriters are following this, and more modern additions to it, and we now look at our tvshows and have to examine whether we're watching pure scifi, or getting that "soapy" feeling because every element that "makes a good story" has been slapped together for commercial gain.

Of course, there's no point spending money to make something if you can't make your money back and more to live on.

So far, I'm enjoying the show...but hopefully it loses the soap opera feel soon. Though, to be honest, I'm just glad to see that we finally get to see some science fiction on the SyFy channel again...

Confirmed, Defiance has been picked up for a second season.

Music from episode #4, "A Well Respected Man", is Scarlet Town by Bob Dylan.

Last night's episode was well done, I thought, and I was glad to see they like my work so much, since the "using nano technology to perform a resurrection" plot line is straight out of my novel The Cure.

I also wasn't sure what purpose the ending served, other than to keep eyes glued to the set...

I had to rewind the DVR a bit to understand just how exactly the crisis of the episode was resolved. I'm still not sure I get it (the resurrection part I got, just not the part how the razor rain was taken care of).


astonwest said:
I also wasn't sure what purpose the ending served, other than to keep eyes glued to the set...
Click to expand...

Sci-Fi The Hitch Hiker's Guide to the Galaxy, by Douglas Adams